Over the past month, stats have been published revealing the success of ecommerce in 2011. The latest figures from the IMRG Capgemini e-Retail Sale Index reveal a total of £68bn was spent online in 2011 which resulted in the Index increasing by 16%!

Christmas 2011 in particular proved to be a lucrative time for online retailers as a number of people chose to shop online from the comfort of their home. Boxing Day 2011 broke all online retail records with 96 million UK internet visits to retail websites according to online data experts Experian Hitwise and now holds the title for was the biggest online shopping day ever witnessed with over 13 million shopping hours accumulated in the UK. 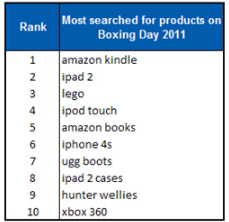 Online retailers have also revealed impressive figures for Christmas 2011. Waitrose online sales were up 49% while the John Lewis website witnessed a 27.9% sales increase in the five week period to Christmas. And according to UK retailer Next, a strong performance online compensated for ‘slightly disappointing’ sales in store which declined by 2.7%. This begs the question, do people prefer to shop online rather than face crowded high street shops at Christmas time?

With a strong finish to year for online sales, this is a round-up of ecommerce in 2011:

The internet continues to attain more and more users each passing year and online retail is growing faster than any other retail sector in the UK. With predictions of a further 13% growth in 2012 and a total e-retail sales estimated to be worth £77bn by the year end, expect this trend to continue.

Out with the old and upload the new!